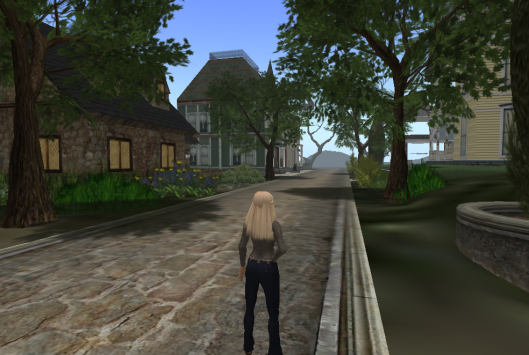 Found Myself in Hampton Woods

I first read about Lost Paradise world on Daniel Voyager’s blog and I see it was rated #1 in something or other of the opensim worlds. Last week I set up an account and my avatar’s name is Wren Grey, just as the one in Island Oasis.

Somehow I have the Imprudence viewer for this world and now when I click on SLurls here on the blogs to go into Second Life, Imprudence shows up. I use the LL viewer for Second Life and also have the Island Oasis viewer. It’s difficult for me to figure things out and often I just click wildly on things and hope something good happens.

Lost Paradise looks very neat and tidy and is a good build. I joined the day of their first birthday and they were recovering from griefers so things weren’t quite settled   at the time. I’ve gone back to explore a few times and everything is OK except for that my AO doesn’t work. I’ve tried several copies of it and really am not up for figuring it out but it does bother me to have that noob waddle.

In SL I’m used to buying hair, right-clicking on wear and it goes right on my skull. In this world I had to select where it goes instead of having it in my hand. I’m just saying this is the sort of thing I’ve been messing around with. I actually lost my beginning hair, which I liked. Now I have hair which is better than what is shown in the photo above.

I’ve only talked to one other resident and that was the owner who is kind and helpful as I stood there bald at the time. I didn’t ask for help because I often don’t quite understand quickly.

I can only speculate as to what this world is about and I’m guessing that most people join because they know others who have. Or maybe they just want a very private place to live; there’s a huge prim allowance that comes with land rental. There will likely be some photos here in the future when I do some exploring.

This thing is finally done:

Of course it is dreadful and no one will ever see it. What I’ve learned is that it would be better for me to write short stories for awhile instead of a novel. Also that I need a refresher course in sentence structure and other writing basics. Knowing I have a unique perspective feels good but I have trouble expressing it clearly. Then there’s the thing with my short-term memory and also my short-term memory. I’m kind of kidding about that.