As shown in the photo above, July 23 is the 11th anniversary of Kowloon.

I had a pleasant wander all over the sim on Sunday, the 22nd and wore the HUD for the selfie event. (I am guessing it had begun.) When you click the board you receive a folder containing a HUD in English and in Japanese. The instructions are simple enough but I failed totally in finding the locations. I don’t regret my time exploring. 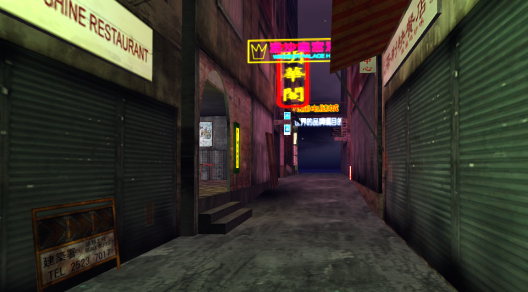 Whenever I spend time here, I can see that the sim has had attention; some things change. There are lots of shops, bars and restaurants. The residential areas are off limits and that can be confusing.

One apartment area has a Siamese Guard Cat meowing a warning. In other areas text appears in local, whispering that the area is private.

There are some teleports that appear to be public and I guess most of them are. A few that look like postal boxes lead to private residences. 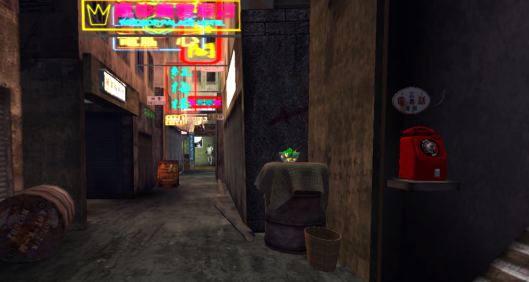 At one point, I discovered I had been ejected into Kowloon jail, which is simply being dumped in the water near the sim edge. Fortunately I could teleport back into Kowloon and continue my exploration.

Kowloon is a wonderful place to explore and take photographs and there are items to shop for that aren’t found anywhere else. I got a couple of chairs from a gacha this last visit.

Happy Anniversary Kowloon! May you have many more.

Wanderlust Art Truck 2018 has been invited for a summer residency at Placebo Holdings in Jormungandr, Jeogeot.

The Truck was very active in 2017, involving travel, parties and documentation. There are about 14 videos on my vimeo channel, including some travelling films. This year, Second Life is very different, as indeed Real Life is.

It brought a smile to my face when Seraphim Placebo invited us to set up the Truck once again. A call for art donations was sent out.

My colleague, Klaus Bereznyak, and I obtained the use of a crane to life the truck and the container packed with art into the lovely park setting.

There are interesting pieces that were donated, plus some pieces from our private collections. There’s no theme, in keeping with the spirit of Art Truck; it’s about creativity, fun and community.

A soft opening was held on Sunday, July 15. Seraphim wasn’t unable to attend; Tee and s4nura, two Gynoids, represented her and greeted visitors.

Art by Elle Thorkveld and Wheedle.

From left to right, a 3D piece I created; propped up against the Truck door is art by Klaus. Shown inside the container: art by Veyot, serra Qendra and Beatrix.

Upper left corner is a 2D piece by Amy Inawe; the crystal lamp is by Isadora Alaya. Against the hedge, art by Nino Vichan. 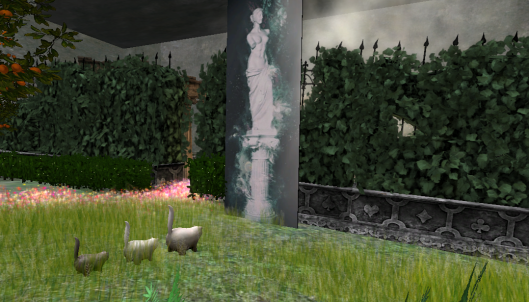 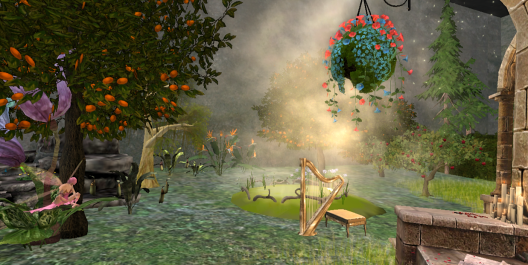 The public is welcome to wander the grounds beyond the Art Truck area. 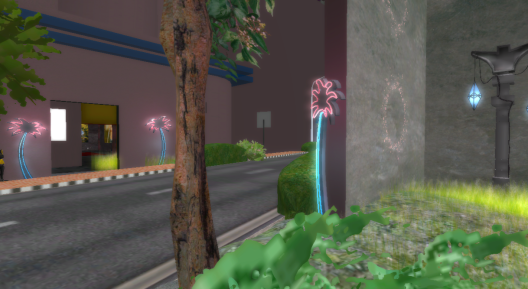 When you wander out and across the road, you’ll find PlaceboLand, a wonderful space to explore.  And down the road is New Placebo Gallery, with photos by Seraphim focused on Gynoids. 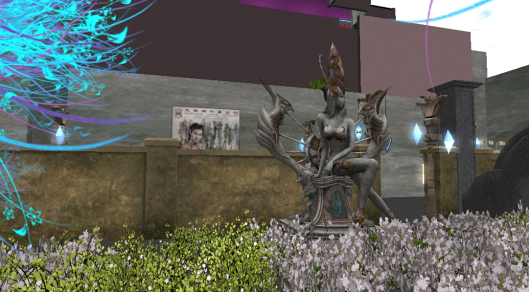 Above is a view in the Fantasy Garden.

I’ve just learned that Seraphim Placebo is also hosting a portrait photograph competition. The portraits must be taken in one of three areas. All entries will be hung on the wall in the “old garden” and the winners will be hung in her gallery.  First prize – L$ 2000; Second prize L$ 1000, Third prize L$ 500.

There are teleporters and big pink arrows to aid you in finding your way around after wandering from the Art Truck landing area, where the contest poster with instructions is located.

I will link to Seri’s blog post about the contest when it is available.

One of the current exhibits I like a lot is Twelve by One by Bump Squeegee.

“Red Dirt Studios, in the heart of the Virtual Chelsea Hotel Gallery Row, is now featuring “12×1”; new works from Bump Squeegee. “Twelve by One” is part of an ongoing series dealing with love, loss, hope, despair and the feeling that there is something or someone out there that will love you to death or eat you alive.”

Recently, I deleted over 500 old landmarks from my inventory. It isn’t as though I haven’t spent any time at all attempting to manage them, but there are periods when they do keep piling up. Some were several years old, at least three and maybe four.

Attending to the essentials of my human’s life, doesn’t allow for following Flickr feeds; there’s a vast amount of changes in destinations that I’m unaware of.  Many older destinations still exist to be explored and enjoyed.

An Italian sim,  LOST TOWN – LA CITTA’ PERDUTA, is one such location. The architecture and quirky furnishings still look great. 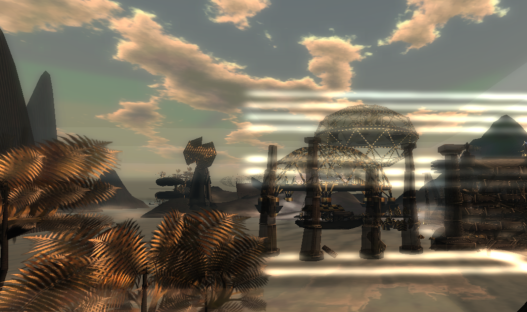 Many galleries had disappeared. The Alpha Tribe sim, showing builds and other creations by the artist, Alpha Auer, is still rezzed, waiting to be explored.

These photos have been cropped; Some have been sharpened a little, many have lightened exposure, otherwise they are unedited. 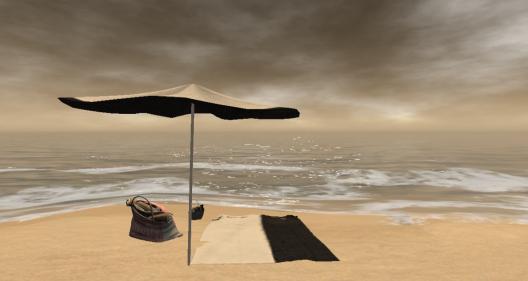 Many times in my teleporting, a destination no longer existed or I would find myself landing under water, under a building or deposited just outside banlines. I was denied entry to one location unless I accepted an ‘experience’,  for which I didn’t really have time.

The photo above was taken at Sommergewitter (since March 2015). The rain and lightening storm is still happening.

Many of what I’d considered destination sims are now partially residential. That is understandable; some seem to be managed better than others. I chose not to explore or keep the landmarks of almost all, but I am including Baja Norte by Lauren Bentham, who does great work. She has kept her older, mainland parcels too! 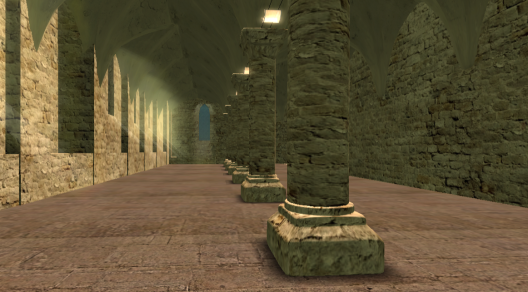 I noticed how the older, prim builds rezzed much more rapidly on my viewer. My experience with most of the new, designer sims is greatly diminished by the vast gray blobs seen, while waiting for textures and objects to load. Lag walking and sliding is not so great either. It isn’t enough to make me give up on Second Life but it makes more sense to just glance at a photo of a destination taken by someone with a monster machine and with editing software and skills.

Many of the old landmark locations have numerous shop rentals, which somewhat surprised me. How can they thrive? The sporadic attention I pay to shopping gives me the impression that it’s all about events. Or that avatars have shut their inworld stores and maintain a MP presence instead.

One of the biggest surprises was the continued existence of  lle Sainte Marie-les-Baines.

I had been quite charmed with it when it was new, had joined the group for roleplay but it simply didn’t work in with the rest of my life.  Not wearing clothes of the era, I carefully looked to make sure there was no one around, left the welcome area and snapped this photo, shown above. By now, all the teleporting about was straining my resources; my avatar was missing some bits.

From the land description: “Everyone who seeks a retreat to relax is welcome to Ile Sainte Marie-les-Bains.The Island is at the Cote d’Azur.Time is around 1900.Please wear time fitting attire.Historic,Art Nouveau,RP,Edwardian,Mademoiselle’s,Galerie Intemporelle,1910, France”

There were also a fair number of locations of rp sims of the “hordes” type and instructions to “Walk Towards the Bloody Gate”.  Some of the former destinations had been on Adult rated sims and are now sex clubs.

Above, is a photo of New Kadath Lighthouse Art Gallery. From the land description: “Home of the exhibit “Maps of Second Life”, an exploration of the Main Grid’s history, geography and culture as depicted via maps and cartography. Also hosting a rotating selection of themed visual art. Juliana Lethdetter, Curator.” 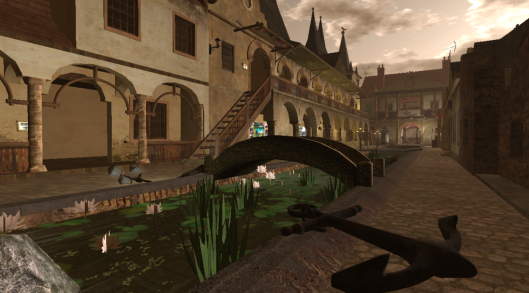 Part of me was hoping that this endeavor would reward me with the discovery of a hidden gem. At least, previously hidden to me. That didn’t happen; maybe next time.

I’ll end for now with a photo of the amazing Vintage Village, shown above. “Come and experience this unique village filled with fantasy. You can listen to live music or shop around where you will find beautiful buildings, innovative gadgets, accessories for your shop, avi or residence. The ambiance of Hungary, Central Europe”.

It was a small shock to see the notice that Kimeu Korg’s “osmosis de un sueno” at DixMix Gallery is ending this week. A new exhibit is scheduled for Friday. This exhibit opened June 9th and I’ve enjoyed it very much; time has really flown by. If you haven’t seen these pieces yet, you likely have at least another day to hurry over there.

Reading the artist statement, it sounds like Kimeu Korg doesn’t take these works too seriously and doesn’t expect us to either. 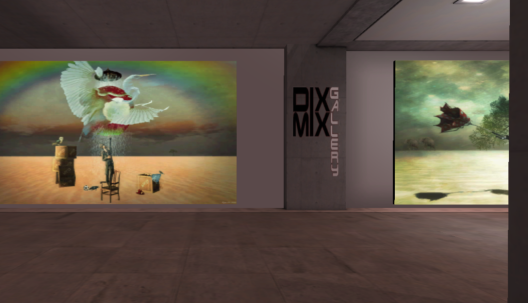 The SLurl should take you directly to the Black Gallery at DixMix where “osmosis de un sueno” is on exhibit.

Having opened mid-June in an informal manner, No Cubbyhole is currently exhibiting at Shop 14 Gallery in Kowloon. I was pleased to be invited to create three digital pieces, specifically for this location by the proprietor, RMarie Beedit. The 192 sq m shop, located in the maze of Kowloon businesses, also holds a Tiki bar and an electronics shop on the ground floor. 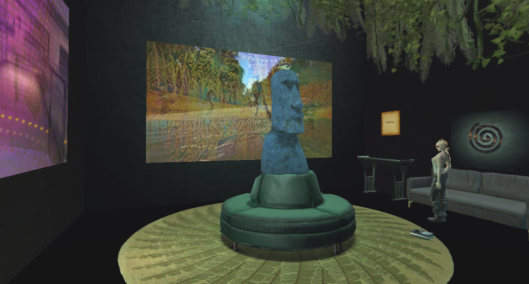 From the artist statement:  “The works represent 3 of an infinite number of facets for the interaction dynamics of those incarnated in service to the mutation of the collective consciousness rather than being here for the community or tribe. The tendency is for these individuals to be lost in the group, viewed as being useful in one niche, delegated to one cubbyhole or limited role, usually as gofer or scullery maid, and expected to silently endure the gross inefficiencies of said tribe or community.”

I don’t know the closing date of the exhibit. Art sales go directly to support the gallery space.

Horizons looks to be mostly residential to me. I’ve spent a little time there, mostly wandering around or visiting the Cafe D’Art when it was in existence. In Horizons Andromeda, Coping Mechanisms, is a 1024 parcel well worth exploring.

Some of the stacked storage containers are open. There are carefully chosen items stashed inside. Outside, you can bounce on the trampoline, with a miniature cardboard house and a giant avocado nearby.

An opening in the fence allows you to wander over to the parcel next door, owned by the group, Innocent Young Throat-Cutters.

The land description:  “Escapist loner shoving inevitables and unspeakables behind the clutter of nostalgic blah.” 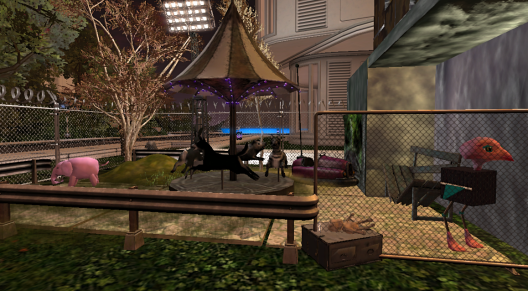 These photos were taken with the windlight of the sim; Andromeda is A rated. 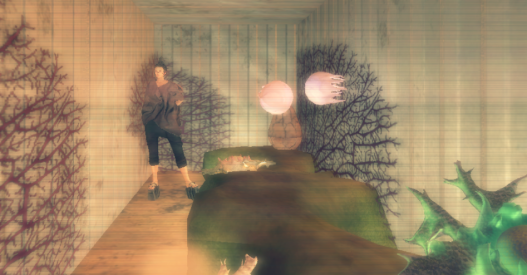 Coping Mechanisms is the creation of Art Oluja; those familiar with her work will recognize remnants of some previous installations.

Some art pieces from her personal collection are on view as well.

When you arrive, you may want to grab a landmark for your inventory. 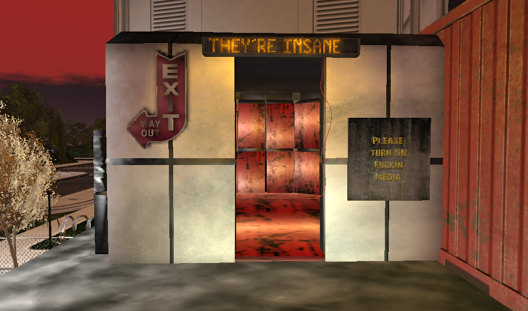 The LM is to aid your escape from the padded room, should you choose to wander in. Enable media for an immersive experience. Be patient; media usually doesn’t work for me and I found this worth any wait.

The padded room was originally installed in the opening exhibit at the club/gallery/refuge, Blush Response.