My visit to Frog’s Garden and Cafe in Bonaire52 was a pleasant interlude in my week. It isn’t a large build and part of it’s a garden center. There are some interesting hangout places surrounding the store. The reason for my visit was a photo by the owner of an outdoor bathing area. And the area in the above photo, which could easily have been missed, was the reason I decided to share this.

There’s still snow on the ground while the garden stuff on offer is mostly spring plants. It reminded my human of the last, wet heavy snow of the season in areas she’s lived before moving to the high desert. That bright, crisp moment of transition when spring flowers are beginning to assert themselves once again.

In the above photo, I’m standing on the deck of a treehouse and below is a shot of the interior. 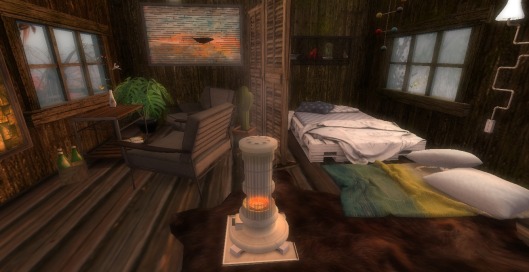 The first photo is of a second floor balcony view in an old, abandoned house. It can’t be seen well from the outside and I only discovered it by going inside and climbing the stairs; I found it enchanting.

There are several paths with views. The building on the right is the cafe. 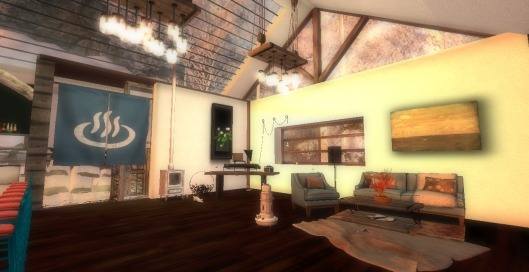 And here’s a shot of the inside of the cafe. The pool can best be reached by walking through the cafe and out through the blue curtains pictured. 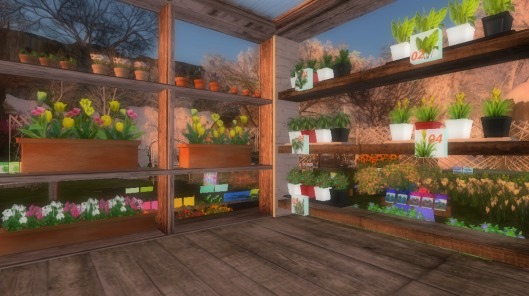 The garden center has some furniture, rugs, skyboxes and other items besides landscaping. There’s a lucky letterboard as well.

Here’s a view of the hot spring pool in back of the cafe although the steam doesn’t show up well in the photo. There are plenty of fresh clean towels and drinks.

In the invitation that accompanied the photo, the owner stated there’s no nudity allowed. It’s a moderate rated sim.