I noticed that the 1920’s Berlin Project role play sim was having an Open House day on the 29th as part of their five day birthday celebration. It was a day when visitors and tourists were welcome without having to adhere to the strict rules. I’d never been to the sim what with me being a giant who wears weird outfits. Regular readers of my blog know I love to see inside people’s homes, so even though my human had lots to do, we couldn’t pass up this opportunity. Above is a photo of some partying in the biergarten. I noticed that the sim owner, Frau Jo Yardley has her office conveniently located next to it.

I very much enjoyed this frst visit, spending hours there. I’d seen a few pictures of the sim, had visited the vintage shops nearby and watched a Designing Worlds episode about it quite some time ago.

The homes that were open had signs in front of them indicating such. It was a good thing that only a fraction of them were open otherwise I would have been there all day. I went into some wealthy homes and also apartments. I would have liked to see a slum area but wasn’t able to locate one. I’m sure I missed things as the place seemed huge to me. It looks like the countryside has room for expansion. 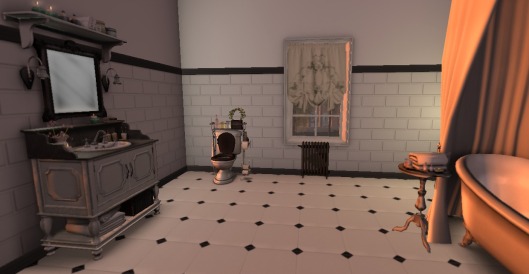 There’s a possibility (no promise) that Jo Yardley will open a London sim and I’m very much looking forward to that.

My favorite thing about this visit was wallpaper and rugs. Really!

There are sources of information about this sim and the events during the celebration that can be found elsewhere. What I focused on besides enjoyment was taking photos. I took over 40 photos in all; you can see the mostly raw shots in a flickr collection.

On Monday, June 2nd is a relaxed rules day, all day, when 1920’s attire is not required and you don’t have to be human. 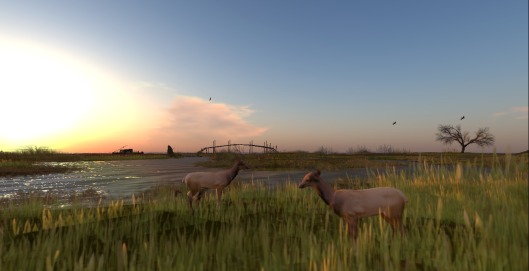 I’ve been keeping an eye on the Gulf of Lune, the salt marshes that are part of the Calas Galadhon park system. I’m pleased that the sim is all right for the month of May. While the rest of the park sims are lovely, the Gulf of Lune is unique and so I’m surprised when it lags behind in donations compared to the other sims.

Calas is depending on donations to help keep the park open. There are break down reports of how the sims are doing and the Gulf was second to last for much of the month. As of a few days ago it had reached only 24% of the goal. Of course things don’t stay forever, but every month it’s still here gives a chance for new residents to see the virtual gems that it is. The tugboat is gone but otherwise things seem to remain the same for the time being. Enjoy the photos from this month.

This is the 512 plot of a friend. It’s in Stanford, the 4th sim to go online in SL and was named after an alley near the LL San Francisco office. It’s grandfathered that you can terraform +40 or -40 here but just because you can, doesn’t mean you should.

The land for sale here is very expensive and it seemed unusual that a 512 plot would be available so she purchased it impulsively. It was terraformed like this and the villa came with the place. Her plan was to use the house for a while until she could learn to terraform by taking a class at Builder’s Brewery.

See that hole in the roof near the balloons? There used to be a large palm tree growing through it. The villa was set to $L0 so she could take possession of it but the tree wasn’t linked.

Neither were the doors, windows, fireplace and teleport system. I was there when she blew them up, or rather returned them to the previous owner of the land. It was funny! But the open breezy feel was appealing and she kept the house like this for over three months. 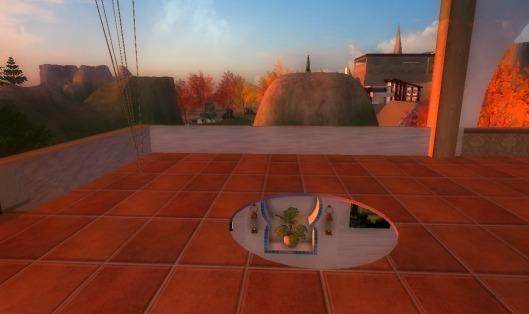 To go downstairs we just dropped through the floor.

To get on the roof without flying, she got a simple ladder that worked fine. The pillows in the hole on the floor were for lounging as well as to break the falls. She grew to really like the villa but wanted The Wayfarer’s Rest by Culprit. 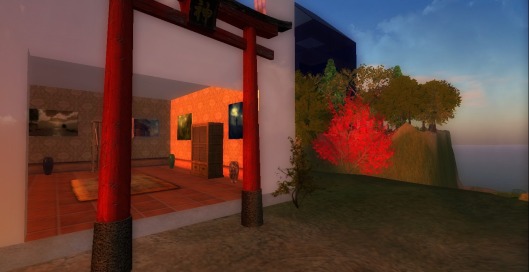 She mostly wants to use the place for hanging out and to display art. I put out some of the low land impact things I had in my inventory. A 512 plot allows for a land impact of 117.

After purchasing the building she wanted she attempted to terraform; I wasn’t around to witness that. To smooth the edges, she would have had to raise it a lot and make her area smaller. Since at least one of the neighbors never logs on, she’s accepting this for the time being.

Here’s what the building looks like. It’s 57 land impact, which leaves 60 to work with; this wasn’t an impulsive decision.

She made do with a Linden Home for the first three years. It was basically a dressing room.

Here’s an excellent post about furnishing a Linden Home. I’ll update with progress on this lighthouse and visitors will be welcome. 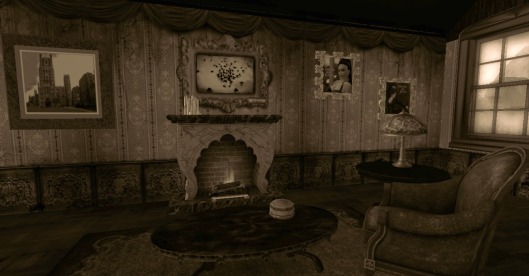 I find this sort of room very appealing. My roots in the Legacies 1891 role play community caused me to seek out some of the shops that sponsor and participate in the World Goth Fair. Information can easily be found about this event which runs through June 1st. 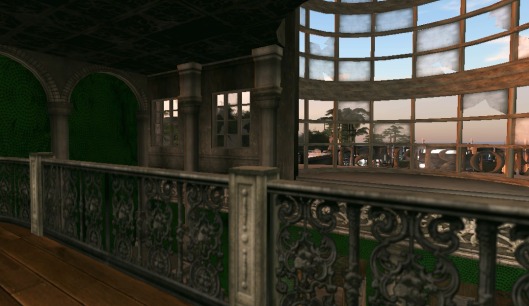 Some brands creatively set up shop in The Looking Glass’s Theater building.

This reminds me of an old painting. 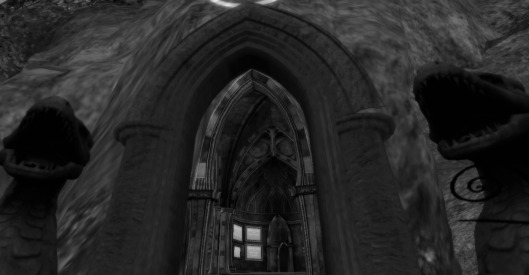 There’s fabulous architecture to be seen.

You don’t have to be a Goth to find something of value in a visit.

On Tuesday I blogged about my visit to Cyber Orthodox and posted a few photos I took from above the water. It’s a LEA Full Sim  Series and this edition runs through May 30th. You can read about it here and go visit here.

These photos were barely edited, just cropping and a little exposure lightening. 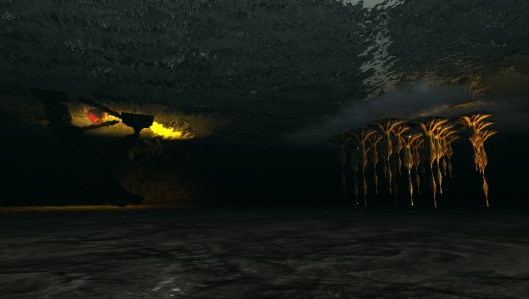 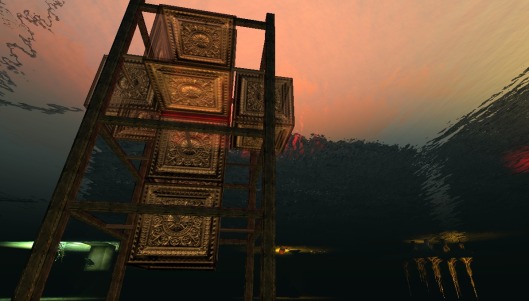 Oh I was so happy visiting and playing photographer here.

edit– griefing attacks on the mainland, a few things that can be done: change land permission for no building or dropping of objects, the individual can be banned but is quite willing and able to make numerous accounts. Unfortunately with all the abandoned land on the mainland, there is still the ongoing problem right now. But it could be much worse; we could be like the griefer. 🙂

The World Goth Fair is a great place to take pictures as well as to shop and also support a worthy cause. Information about the event which runs through June 1st is easily found. 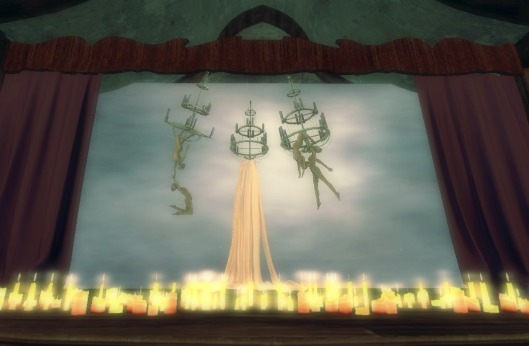 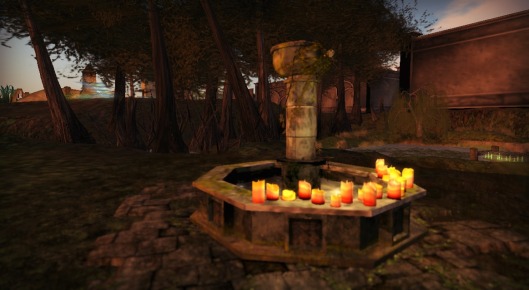 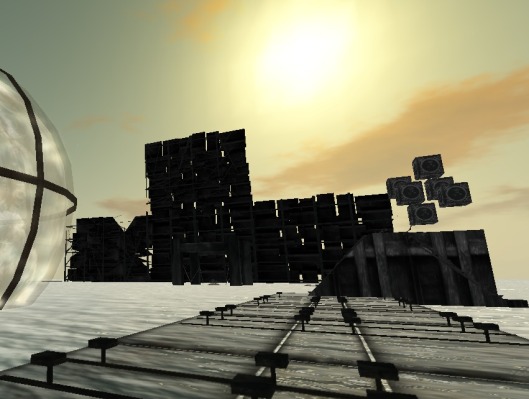 Igor Ballyhoo’s Cyber Orthodox at LEA Full Sim Art Series is open through May 30th. I was delighted to find it and spent most of my time underwater. I don’t recall seeing any other posts but one about this so I’m inclined to just show my photos and not say much since I’m likely presenting this all “wrong”.

Today I’m showing the posts I took above water and even they look different than the ones on the LEA blog post. 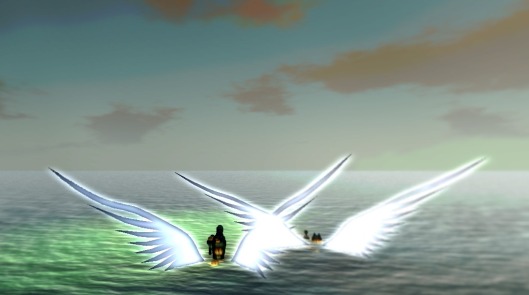 The landing point I got from the blog post had me arriving underwater. 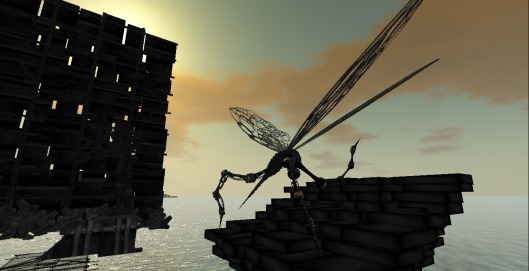 This is a huge mosquito. It looked great up close but is difficult for me to photograph.

The underwater pictures are being posted soon. 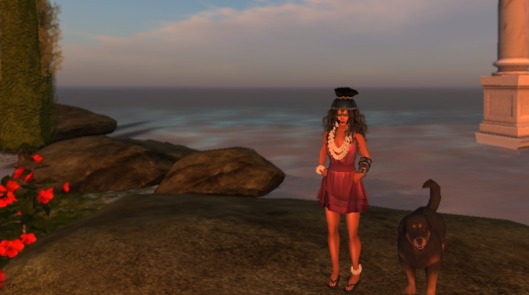 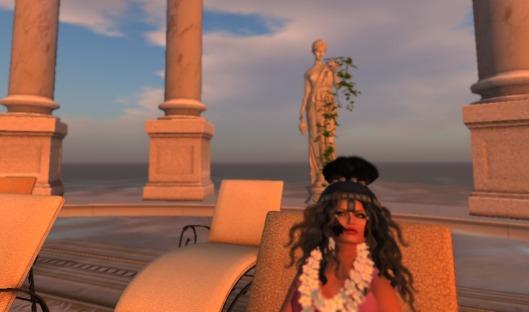 This is my second year attending the World Goth Fair in Second Life. This year too, there are beautiful scenes to photograph and these posts are mostly of that. The Fair runs through June first. There’s plenty of information on the background and shopping stuff elsewhere. Not only is this a wonderful cause to support but this year, like last, I found an outfit and also some home decor that fits my needs and taste perfectly even though Goth isn’t my style.

While I was there it wasn’t too laggy and I enjoyed my time there. I didn’t use the region default light; I used sunset on the Lab viewer. 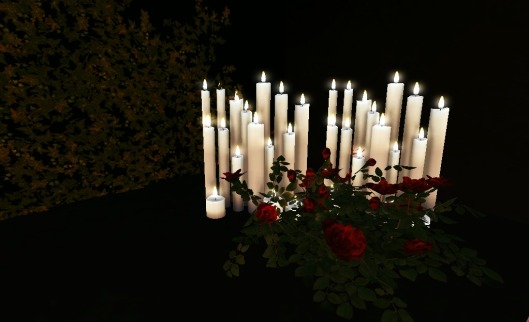 Some of my favorite brands sponsor and have booths at this event.

My human let me attend one and a half of the Silicon Valley Virtual Reality Conference and Expo sessions that were streamed live at the LEA Theatre in Second Life. At the session on Monday, I crashed half way during Philip Rosedale’s keynote speech and didn’t return. On Tuesday, I got to see and hear most of the panel discussion; there were some audio and streaming video problems. For being on my older laptop that barely runs SL (because that one has working audio), using wireless and on a day when SL was giving most people a rough time, it went rather well. And I got something out of it.

Now if you want to read an articulately opinionated, reportishly factual record, this isn’t it. There were at least four well-known bloggers in attendance and I’m sure there are videos on the web for people who care.  I just thought it was cool to be in virtual reality at a virtual reality conference in real life. 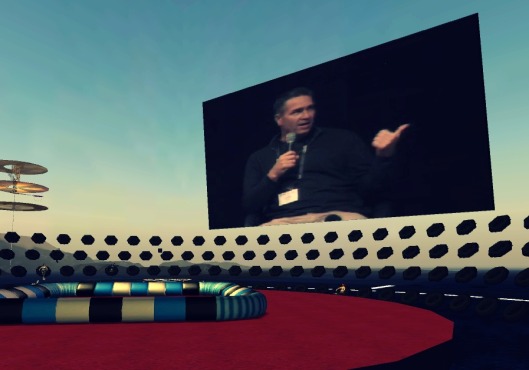 The part my human liked best was when a guy at the panel discussion talked something about kinetics and crafting and virtual reality. She loves using her hands, working with fabric, beads, food, art supplies and such. Recently she observed a 3D printer making small sculptures out of colored synthetic materials. It’s great that some folks are working on this stuff.

In the above photo is Ebbe Altberg, CEO of Linden Labs. 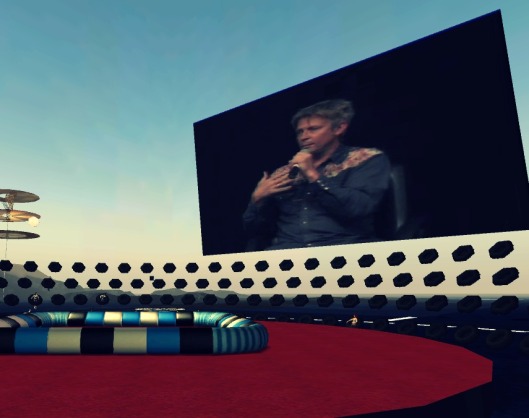 Of some concern is the gender imbalance in this realm. Of the 35 speakers and panelists, only one was a woman. My human initially didn’t want me to attend because she feared it would just be a bunch of tech guys with money going blah blah blah.

Will these advances in virtual reality be accessible to most who want it? Will there still be a place for people with disabilities and for those with little disposable income? The topic of disabled people came up briefly at the very end and the panelists looked uncomfortable. That was possibly because they were out of time and wanted to go get a drink or something.

Identity and privacy were discussed and the ToS mentioned among other things. Including flying penises.

Philip Rosedale, who was long gone from SL long before I rezzed, is in the above photo. Watching the panel discussion was more tolerable because of a few amusing comments in local chat regarding his western shirt and bedhead.  And whether Draxtor, shown below, needs a haircut. 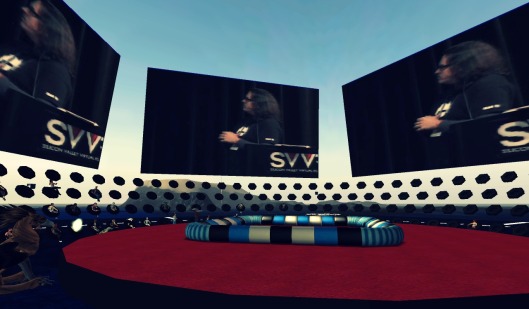 My human loses track a lot. /me laughs!