When I saw Designers United 5 listed in the destination guide I wasn’t sure what it was. I teleported to take a look and wandered around while pondering thoughts of life and such.

There was a board showing the script amounts of scanned avatars near the landing. Mine was 0.1. There’s a script scale in the home where I change clothes, not really attractive but quite useful.

This seems to be a collection of designers and a few of their creations. It’s more artistic than just a group of vendors. Most of them I hadn’t heard of—not an area of expertise for me at all. But I saw some fascinating things. One of my favorites were koi bags with a wiggling tails. There’s also a dress with moving clouds in it and a hat that looks like a beaked skull. It comes with a unique dress and bird-like legs–I didn’t check it out really closely but these things are worth taking a look at.

It was a relaxing visit, not mentally taxing as I took in the visuals and thought about give and take in relationships. 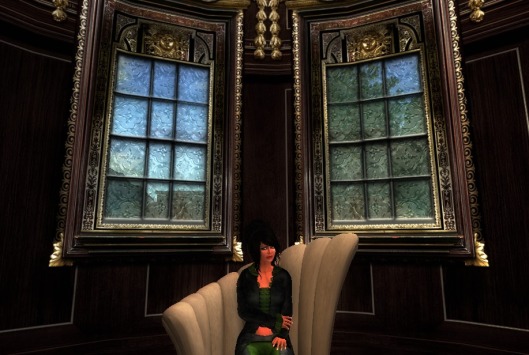 The above picture is included simply because I like the clothes and the room.

Anyway, I’ve listened to the relationship woes of people lately in Second Life as my typist has in first life.  While the power sharing in relationships can’t always be 50/50, some people seem oblivious to the fact that their partner is getting crumbs while they are going on as though everything is about them.

I noticed a piece online about the elderly couple who do the Swiffer commercials. They’re in their 90’s and at first the advice they give might seem simplistic. It goes something like–every day each person in the relationship needs to feel loved. Each one. Both of them. Let that sink in.

That seems to be an effective guideline for all relationships, both in first and second life. Each person needs to feel they matter in the interaction. The one-sided thing is a bore and it becomes tedious to overlook the ignorance. My typist has heard sad tales of loss lately simply because the person who left never knew they mattered. They weren’t told or shown. They began to feel like fools. Or worse.

We’re all under stress and we all have important goals regarding growth and even survival. But if it’s working for you to keep your head up your ass and continue to take for granted the people who are there for you, putting up with your quirks and trying to please you, go right on doing it.

This isn’t directed at anyone in particular. I have fine, caring friends in Second Life. I’ve just observed attitudes and behavior by bewildered people who just don’t seem to get it that when they’re at the table it’s difficult to keep friends when acting like pigs while others get the crumbs.

And these were my thoughts as I looked at the creativity of designers yesterday evening.